Nine Men’s Misery was a grisly scene of capture, torture, and killing 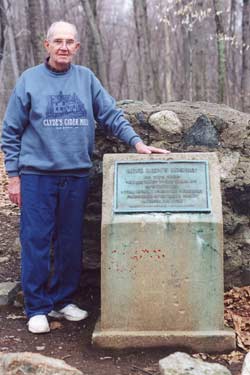 King Philip, the chief of the Wampanoag tribe of the Rhode Island/Massachusetts area of New England, initially succeeded in the battles with the colonists. One of the most disastrous military battles for the colonists was called Pierce’s Fight, in which most of the colonial soldiers of Pierce’s command were killed.

A group of nine of the soldiers escaped the original Indian ambush, but were separately later captured, tortured, and killed. Benjamin Bucklin was one of the nine who were killed. The nine bodies were found a day later by a military burial mission working on burying the remains of those killed the day before. The remains were buried on the spot on which they were found, a rise of land in a swampy area. Because of the gruesome nature of the torture indicated by the state of the bodies found by the burial mission, the site became known locally as the Nine Men’s Misery.

The Nine Men’s Misery monument in Cumberland, Rhode Island is located in a quiet, dark, uninviting place in the woods, near a former monastery that now has been replaced by a public library. The monument—piles of stones cemented together with a cement pillar next to the stone pile, and adorned with a plaque—sits on top of a hill in what in 1676 was a swampy area. (Photo above shows the monument and John Bucklyn, who has assisted the Society in finding sundry historical Bucklin sites.)

The monument was erected in 1928, by monks living in a nearby monastery. (The monastery burned down in 1950, and was not rebuilt.) Presumably the monks intended that the pile of cemented stones would stop the disinterment’s (mentioned below) that occurred from time to time.

During the one year Kin Phillip’s War of 1675-1676 nearly 4,000 people died. The colonists were seriously concerned that the Indians might win. The war ended more than a generation of previously harmonious relationships between colonists and Native Americans. For more on the war see James Drake’s book King Philip’s War: Civil War in New England, 1675-1676.

The bodies were dug up repeatedly over the ensuing years by curious New Englanders. One such disinterment in 1790 resulted in the medical identification of Benjamin Bucklin. (See text excerpts below.)

“….a strange incident occurred in relation to the nine men’s grave. It was either during, or shortly after the Revolutionary War. Some Providence gentlemen, led, it is said, by Dr. Bowen, went up to the place and dug open the grave. They had already stretched three of the skeletons upon the ground ere they were discovered. When the Cumberland people found out what was going on, a hue and cry being raised, and the farmers assembling from all the region round, the cessation of the robbery was compelled, the disinterment being regarded as a first-class outrage. It is not said whether the affair took place at night, by the light of lanterns in the windy forests, but the story is true as it is told, and well illustrates the peculiar place the tradition has in the minds of the Cumberland people. One fact was settled by the disinterment, and that was the identity of the men themselves who were buried. One of the skeletons dug up was of extraordinary size, and by the fact of it’s having a double set of teeth, was recognized as that of Benjamin Bucklin (Buckland), of Rehoboth. It is assured thus that the men were from other colonies than that of Providence.”

The remarkable skull of Benjamin Bucklin was given to the Rhode Island Historical Society, during the 19th century, for preservation, but unfortunately, the Society “lost” the skull sometime in the 20th century.

“…I have seen no notice of this in history, but as to the main fact there can be no doubt. The bones of these men were disinterred (not many years ago) by some physician for anatomical purposes, and were found nearly perfect. But the people in the vicinity insisted upon their being restored, which was accordingly done. One of the slain was ascertained to be a Bucklin, of Rehoboth, from the remarkable circumstances of a set of double front teeth, which he was known to possess.”

“….The fact that the medical students, from curiosity or to verify the tradition, or other motives, did visit the spot and exhume the bodies, and prove their identity by that of Benjamin Bucklin (or Buckland), of Rehoboth, from his unusually large frame and “double set of teeth all around,” has also been substantiated. What is still more remarkable than the discovery of the letter, the author met a physician soon after the publication of this history, in 1834, who took pains to state that he had read the account of “Nine Men’s Misery,” and was able to testify that it was substantially correct, as he was one of the “medical gentlemen” present, and aided in the exhumation and finally examined the bones. Having this statement directly from his own mouth, it is personal knowledge of the event, so far as this fact shows.”

“Mr. Daggett visited the spot a century and a half after, talked with the people then living in the neighborhood, and wrote the story. He describes the spot and the heap of memorial stones piled upon the grave. This must have been about 1830. Mr. Daggett in his manuscript told of the dis-interment and about the skull of Bucklin with double teeth, which was then exhumed. These teeth filled the jaws: there were no “single” teeth In 1866 I myself visited the spot and saw it exactly as John Daggett described it.”

Victor Franko has allowed us to store for viewing by researchers a licensed copy of Victor Franko’s book length documentation of the Nine Men’s Misery, and also a short novel he wrote based on the events.