Because the founder of the Bucklin family in the United States, William Bucklin, lived mostly in Rhode Island, and generations of Bucklins have lived there, there are, as you may expect, several Bucklin place names in Rhode Island. That’s why we have a special page about Rhode Island.

But don’t overlook almost every other state in the present United States. Of course, New England states are prominent. Good examples of Bucklin place names are found in the adjacent towns of Adams and Cheshire in Massachusetts. The Bucklins were a vital force in those towns. Take a look at our Special page on Adams, MA.

Bucklin Hill is located in West Guilford, a few miles east of Halifax, VT, in the Green River valley of southeastern Vermont. Halifax is an entirely rural township comprised of wooded, steep valleys. It is the second oldest town in Vermont, chartered by King George the Second before the birth of the American republic. The original setting of the Bucklin Farm was majestic. Sitting on a hilltop plateau by itself, the original farmhouse location commanded a view down the Green River Valley, one of the last undeveloped river valley in Vermont). The farm was a hard scrabble subsistence dairy, timber, and vegetable operation throughout the nineteenth century.

To get to the location of the Bucklin farm and also the original Bucklin family cemetery on the land, you go to the location known locally as the Carpenter Cemetery. (The Carpenter Cemetery is actually on the Bucklin Farm Hill property. Carpenter was a prominent man, a somewhat earlier settler than Bucklin, the adjoining landowner to Bucklin, and the Bucklin and Carpenter families were buried in the same location.) Start from Battleboro, VT, and go South on US Highway 91 until you get to Exit 1. Exit the US Highway, and head to Guilford, VT. In Guilford, turn right on Guilford Center Road and go about three miles to the Guilford Historical Society and what used to be a more thriving town, although still known as Guilford Center.

The Bucklin Hill home was built on the top of the hill. The home is now owned by Stuart and Barbara Hunt. In the late 1900’s Stuart Hunt was a Vermont state senator. [That’s the reason why the Carpenter Hill Road when it comes out on the “Hinesberg (paved) Road” is called the Senator Hunt Road.] The Hunts orally have reported that Lurinda Bucklin, who died March 26, 1874, was the last person to live in the Bucklin Hill home, and that she was the wife of John Bucklin, who died June 10, 1865.

Across the road from the Carpenter (/Bucklin) Cemetery a Baptist church was started. However, when construction was abandoned at an early stage of construction and the Baptist church then was built about a mile away in what became West Guilford. The reason for the shift in location probably was the difficulty of reaching the top of the Bucklin Hill in the wintertime. In like manner the difficulty of going up the hill in the winter probably was the reason why the original Bucklin hilltop location for the house was abandoned, and the house taken by ox sled down to its present location near the foot of the hill where the land is somewhat flat and contained (and still does) the major roadway for the farms of the area.

The Rev. Benjamin Bucklin (1754-1838) and wife, Patience Horton, lived in Guilford, VT, where Bucklin Hill Farm is located. Rev. Bucklin started the Guilford Baptist Church in about 1778. Benjamin was the son of Esquire (Squire) Bucklin (1731-1818) of Foster, Rhode Island and wife, Hopestill Ballou. The towns of Guilford, VT, had a number of Bucklins, Ballous and Carpenters. The Reverend Benjamin Bucklen changed the spelling of his name to Bucklen and some of his descendents changed the spelling to Buckland. Rev. Benjamin Bucklin died at the age of 84 years.

Gerry, Chautauqua Co., NY was once (early 1800’s) known as Bucklin’s Corners, and was populated by Bucklins (James and son Willard, among others) that moved from Windham Co., VT. Read more about the history of Gerry. The area was an unbroken wilderness up to1815, when several families, all from Vermont, came to start new lives. “Vermont” and “Bucklin’s Corners” were the first names attached to the area. The first recognition of the name Vermont to this locality is found in the town records of 1818: “A survey of a road beginning at a pine stump near James Bucklin’s house, said stump standing in the highway now designated by the name of Vermont.” However, in 1820 James Bucklin opened a hotel which caused the place to be known as “Bucklin’s Corners”. Bucklin’s were early prominent in the Bucklin’s Corners area. The first town meeting, in 1830, included the election of Willard Bucklin as one of the two commissioners of highways, and James Bucklin, Jr., as one of the three overseers of poor. (For a period of six years beginning 1856, James Bucklin, Jr., was the supervisor of the substantial Gerry Orphanage, which cared for both children and also aged persons without means for their own support.) However, the post office was named “Vermont” until 1876, when Gerry became the name of the post office and the village area of Bucklin’s Corners became Gerry.

There is a Bucklin, Franklin Co., MA. We do not know anything more about it. Anyone give us any ideas of why the town is named Bucklin? 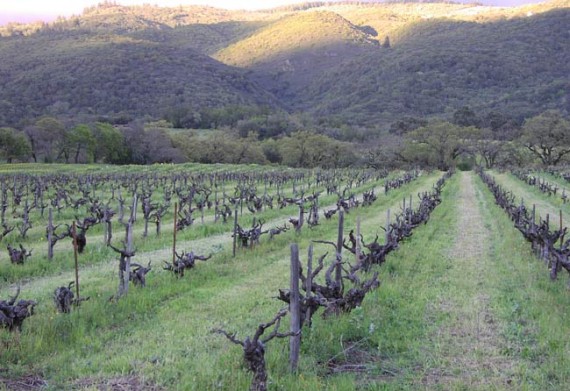 Are you a Bucklin going to the wine country of California? Do not miss the Bucklin Old Hill Ranch winery. Absolutely wonderful wine from the oldest vineyard in Sonoma County. Four Bucklins and a historical vineyard with a unique place in wine history! 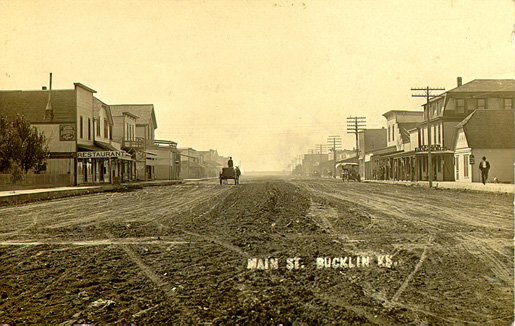 Kansas, which has a city named Bucklin, which of course has a lot of businesses that include “Bucklin” in their business name. Bucklin, Ford County, Kansas population was 710 in 1990 (it’s now 725) with the city land area being a total of 353 acres. Since 1990 the population has been shrinking. We thought you might like to see what it looked like in 1909.

Anything Kansas has, Missouri had it earlier, is what they say in Bucklin, MO. Bucklin, Linn County, Missouri population was 616 in 1990 with a land area of 702 acres. (Fewer people but more land than the city in Kansas.) It claims to have been named Bucklin before the town in Kansas. In 1845 James H. Watson and Dr. John F. Powers established Bucklin Township in Missouri. Bucklin was named after Major James McGee Bucklin, Chief Engineer of the Hannibal and St. Joseph Railroad, in a failed bid to get the railroad division point. In 1866 the town of Bucklin was incorporated, and one James H. Wyett became the first “Lord Mayor of Bucklin”..

Bucklin Township, Michigan, was near present day Wayne. Three Algonquin tribes – Potawatomi, Ojibwa, and Ottawa – met each year on the middle fork of the Rouge River at the site of Nankin Mills to establish hunting territories. In 1824, territorial Governor William Cass created Bucklin Township, which covered the cities now known as Westland, Livonia, Wayne and Garden City. Bucklin Township was later divided into Nankin and Livonia Townships. This Bucklin Township was named after a William Bucklin who was a fascinating man. He realized when the Erie Canal was being built that money could be made by the man owning land in Michigan Territory when settlers arrive there via the to-be-built canal. He secured a judicial commission from President Madison and used it (trading services for land) to gain land which he sold to new arrivals to the Territory. (400 acres he owned became a century later a part of the site of the Henry Ford Plant.

“Of the Field Officers of the 24th, Col. Morrow was prostrated by a scalp wound, and remained for some time in the hands of the enemy. Lieut. Col. Mark Flanigan, … lost a leg. Major Edwin B. Wright, … lost an eye,… As all the Field Officers were wounded, the command devolved upon Capt. Albert M. Edwards….Col. Morrow commends very highly ….Sergt. Major Andrew J. Conner and 1st Sergt. Geo. W. Haight, who fought with wounds still unhealed, and …1st Sergeant Charles Bucklin and corporal G. W. Evans, are praised for their bravery and purity of life; they were both killed on the field.” [Ref.]

The death of Charles Bucklin resulted in the Bucklin name being placed into some place or organization references in his area of Michigan. Charles Bucklin was a product of the Midwestern social culture of the 1800’s . The Brigade in which he fought, the Iron Brigade, known as the Iron Brigade of the West, was an infantry brigade composed of regiments from states that are today considered Midwestern. Noted for its strong discipline, its unique uniform appearance, and its tenacious fighting ability.

There also is a Bucklin Township in Slope County, North Dakota. Slope County is in the far southwest corner of North Dakota. Ms Schatz, the Clerk of Court for the Slope County tells us that Bucklin Township was named after a man named John August Bucklin (Gus) who, in 1914, homesteaded the south half of Section 28 in Bucklin Township, north of Marmarth, ND in 1914. John with his half brother Ted Johnson ranched there, raising cattle and horses together. In 1917 John was elected county commissioner. John Bucklin and Ted Johnson sold their ranch operations during the drought in 1919. In 1926 John bought and operated the Corner Store in Marmarth. He later sold the Corner Store and moved to Orleans, Nebraska.