The Grave of Joseph Bucklin, 4th 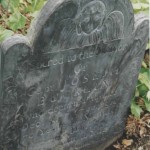 The gravestone reads: “Sacred to the memory of Capt. Joseph Bucklin who departed this life December 27, 1790. Aged 70 years 10 months 1 day. Having through life sustained the character of an industrious and honest man.” 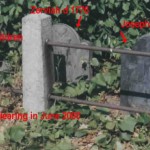 Headstone composition is slate in “good” condition in June 2000, with good legibility. The stone carvers was Gabriel Allen (identification of carver made by John Sterling) This same carver also did the gravestone of Zeriah.

More on the graves in the family plot

This family plot has Col. Hezekah Sabin in the back row of graves and his descendents in front of him. The very left front corner of the plot has the grave of his grandson James Bucklin, who died soon after birth. Thus the Joseph Bucklin family began to fill in the line on the front row of graves of this family plot. This line of graves is the end of this line of Bucklins. Although Joseph Bucklin’s siblings and uncles left vigorous lines of descent, the Joseph Bucklin 5th who fired the “First Shot of the Revolution” has no direct descendents.

And then to the viewer’s right (and the last in the line of graves enclosed by the present iron railing, is the gravestone of Nancy Bucklin Ensworth, whose gravestone shows the is the widow of Gideon Ensworth of Canterberry CT, and that she died 28 Sept 1826. Nancy was a teen age girl when her sister Sally Bucklin was born, and the death of her sister when Sally was only 14 probably was the inspiration for Nancy naming her first born daughter “Sally Bucklin Ensworth”. The tragedy was that this daughter also preceded Nancy in death. Nancy’s headstone shows it was erected by Hezekiah Sabin.

How to Find the North Burial Ground

To get to it, exit from I – 95 at the Branch Ave. exit, and you will almost immediately find the cemetery. Bear right toward Main Street, where the entrance is on Branch before Main Street. 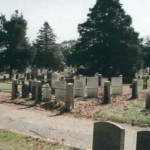 John Sterling knows theJoseph Bucklin 4th grave site in Providence RI location by his method notation as SEC: AA LOT: MAP:00646 — But for the average person, find the site of Joseph Bucklin 4th’s grave by entering the North Burial Ground at Providence, RI, and then traveling Northerly on a lane in the cemetery marked as Elm Street. The area you are looking for is shown on this photo. (Click to enlarge and clarify the photo, and print it out.) 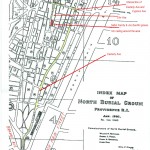 Click to enlarge the map. You will get a large map with scroll bars to get a good view of details of the route to the site. Print out the enlarged map and take it with you to the cemetery. 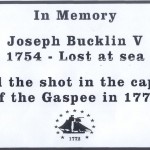