Origins of the Bucklin family and of the Joseph Bucklin Society logos are recent, but the probable “Bucklin” family coat of arms is ancient. 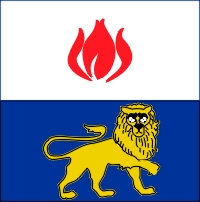 A “logo” is not a family coat of arms. Read this entire page to be informed about the likely coat of arms of the William Bucklin (born 1606) family.

In the twentieth century some Bucklin family members in the United States adopted a family identifying device. It is a “logo.” A logo is a graphic mark or emblem used by organizations and individuals to aid and promote instant public recognition. 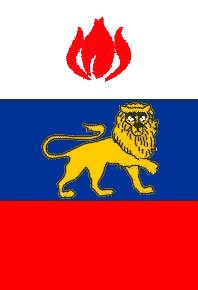 The Joseph Bucklin Society logo is formed by taking the logo of the Bucklin family, and adding, below the square of formed by the two fields of the Bucklin logo, a third plain red field. The red field is a reminder of the sacrifices and military fortitude of those who gave their fortunes and lives in forming the new country that became the United States of America.

There is no proven Bucklin family coat of arms. Commercial purveyors of family crests may tell you they have one, but they try to pass off inaccurate or incomplete research. Many purveyors attempt to sell you the German “Buchlin” coat of arms, which we know is not the William Bucklin line. Others attempt to sell you one of the several best known English “Buckland” coats of arms. Those common “Buckland” family coats of arms are not that of the family of William Bucklin, from which the American Bucklins are descended.

See discussion further down this page titled as “Most likely ancestors of William Bucklin”. It tells you what is known regarding the actual coat of arms of the John “Buckliner” family, of Dorset, England. That family is probably the ancestor family of William Bucklin.

But first, you need to understand why when William Bucklin came to New England (the 17th century), the words we write today as “Bucklin” and “Buckliner” and “Buckland” and “Buckler” all could have had about the same pronunciation, and identified the same family in southern England.

Pronouncing the written word, and writing what was heard when William Bucklin immigrated to New England in 1630.

Strange as it may seem to persons used to 21st century American pronunciation, in the 1600’s (the 17th century) in southern England (and in New England), the spelling of a word that someone pronounced orally was not stabilized. Stranger, still, to us today, the pronunciation of a written word was not stabilized. In England and New England, in the 17th century, something we today would spell as “Buckland” could be pronounced in Dorset, England, something like “Bucklin” or “Buckler” or even “Buckliner”. Or vice versa, that is, for example, William Buckliner might have pronounced his own name such that others would write it down as “Buckland” or as “Bucklin”. Few people wrote, and those that did were not trained to always spell the same word the same way.

The Joseph Bucklin who was the son of William Bucklin could write, and he firmly used the name of “Bucklin” when he wrote the name, even though some official records of 17th century Rehoboth referred to his father as “Buckland”. By the time of the grandchildren of William Bucklin the name was firmly established and written as “Bucklin.”

Most likely ancestors of William Bucklin

William Bucklin most likely was from one of the several families named “Buckland” or its variations in the Dorset, England, area before 1700, more particularly the group living in the area of Buckland-Ripers. See our data base of family genealogical information. See especially our data entries regarding the family of a Gentleman sometimes written as John Buckler, also written sometimes as John Buckland, also sometimes written as John Buckliner, born 1543. John’s family had a right to a coat of arms. Especially noteworthy is that this Buckliner / Buckler / Buckland family is shown once as living at “Causeway”, in Dorset, and that we have identified the “Causeway House” in Wey, Dorset, as a more than possible place from whence William Bucklin emigrated to New England. The family arms of the family ancestors of Gentleman John Buckler were recorded and validated by the Royal Heralds in the 17th century as: “Arms: Sable, on a fesse between three dragons’ heads erased or, as many estoiles of the field.” (Probable meaning then: Black shield with three gold dragons’ heads, ragged at the neck, on the top portion, separated by a gold portion across the middle part of the shield, and three gold stars with wavy arms on the bottom part of the shield.)

Because there as been no proven written link between the Bucklins in America and an English family entitled to use a coat of arms, you are not entitled, and it is not appropriate, to use the English coat of arms of John Buckliner. 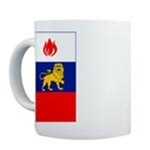 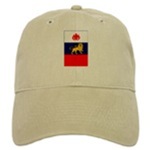 The Joseph Bucklin Society has appropriate “Bucklin” logo items you can and should use. Our appropriate and richly symbolic logos are used in the clothing and gift items sold in the Bucklin & History Gift Store.

Symbolisms of heraldry involved with the Society’s logo

The Bucklin Society’s logo can be described in English heraldic terms as:

a shield triparted; in chief, a field argent, a fire gules; in fesse, a field azure, a lion passant, guazant, or; and a field gules.

Here’s what that means, in today’s American language.