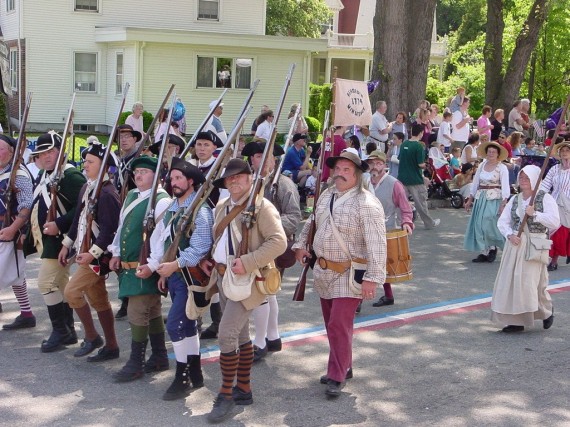 Rhode Island is the place to be on the second Saturday in June each year. Pawtuxet Village, a historic area of Warwick, Rhode Island, comes alive with history. Recreators show up in costume and show you what is was like in colonial times.

The parade is the centerpiece of the Gaspee Days celebration. It looks and feels like a Hollywood film ideal of a small town parade. That is, it is a small town American neighborhood atmosphere, with people sitting on their front lawns in lawn chairs to watch the colonial history parade. Like a Hollywood film parade, the parade is full of Revolutionary War reenactment units, bands and organizations from all sorts of places.

In addition to the parade there is an encampment of recreators. (They actually stay in the park overnight in their colonial style tents.) They love to tell you and your children what life was like in 1772. It is a fun way to celebrate the American Revolution and learn more about the Revolutionary War and those who risked all their property and their very life in the revolutionary event that gave birth to the United States.

This unit shown shown in the photo above is a unit which recreates the Rehoboth Town Militia. Originally chartered in 1774 by the town of Rehoboth as a town Militia unit, the unit was comprised of mixed Militia and Minutemen. In 1774 John Bucklin II was a captain of the Rehoboth Minute Company unit. (John was a cousin of Joseph Bucklin 5th, who fired the shot in 1772.)

By 1775 the Rehoboth Militia was a force of 210 persons. On April 9, 1975, ten days before the confrontation between the British and American forces at Concord and Lexington, the unit was sent to Freetown MA. Without a shot being fired, the Rehoboth militia seized 40 stands of British arms, munitions, and accoutrements, from the British military unit at Freetown.> Ten days later, the British marched from Boston to Concord and Lexington, to seize American arms and munitions. The Rehoboth Company was immediately dispatched to Concord. The Rehoboth Minute Men was commanded by John Bucklin, and had several Bucklins in it.

If you are a Bucklin, and you have an appropriate colonial (1770’s era) costume, this unit will welcome you to join them in their annual Gaspee Days march. Contact them!

Visit the Rehoboth Minute Men web site, where you can learn more about that unit!